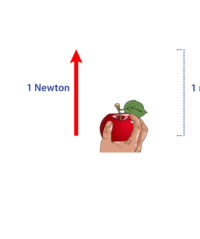 Table Of Contents: What Is Work?

Work occurs when a force is exerted on an object and causes the object to move. The force exerted and the movement of the object must be in the same direction to be considered work.

If the force exerted is in a different direction than the movement of an object, then work does not occur. When you pick up a box, the exerted force and movement of the box are in the same direction, so work is done. However, when you carry a box, you are exerting force in a vertical direction to hold the box, but the box moves in a horizontal direction as you walk. Carrying the box is not considered work.

A Newton meter is also known as a joule. One joule is equal to the amount of work when one Newton is exerted to move an object one meter.