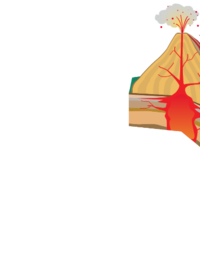 Beneath the surface of a volcano is a magma reservoir where rock that is exposed to heat and pressure changes into magma. A long tube through the crust called a pipe connects the reservoir to the surface.

Lava flows out onto the surface through an opening called a vent. Some volcanoes form smaller side vents where lava and gases escape. A cone-shaped depression called a crater often forms during explosive eruptions.

3. Why Does a Volcano Erupt?

When magma rises toward the surface, gas bubbles expand and increase in pressure. The force of the gas pushes the magma out of the vent and causes an eruption.

There are two types of eruptions—quiet and explosive. Quiet eruptions are non-explosive and occur in volcanoes with low-viscosity, low-silica magma. The fast-moving lava flows out of the vent and across the surface of the land.

Explosive eruptions occur in volcanoes with thick, high-viscosity magma that is high in silica. Magma builds up within the volcano's pipe rather than flowing out. Pressure increases until an explosive eruption occurs.

Volcanic material can be found in all different sizes from tiny ash particles, to cinders, to large pieces called volcanic bombs. Obsidian, pumice, basalt, and rhyolite are all igneous rocks that form from volcanic eruptions.