The Periodic Table of Elements 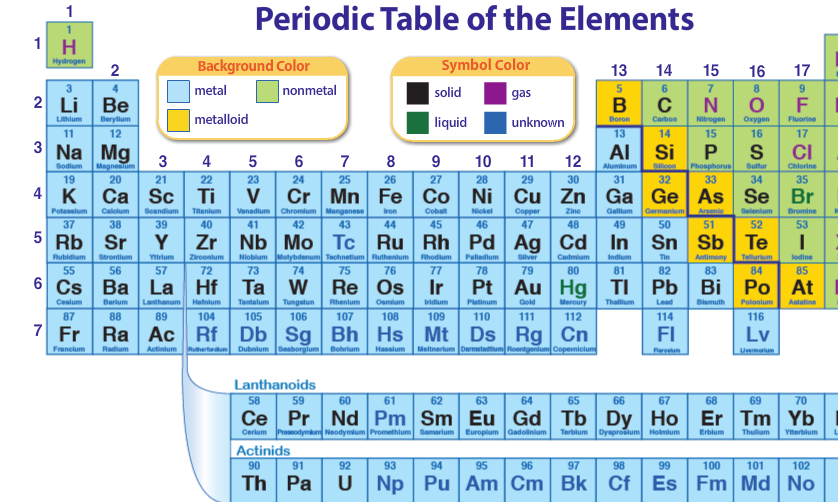 Table Of Contents: The Periodic Table of Elements

In 1869 a scientist named Dmitri Mendeleev developed a periodic table to help organize information about the 63 elements known at that time. He arranged the elements in order of increasing atomic mass. In doing so, he noticed that those that had similar properties such as density, appearance and melting point occurred in a repeating or periodic pattern. He found that these properties of elements repeated every seven elements. Because of this pattern his table became known as the periodic table of the elements. His first attempt at arranging the known elements left some gaps in the pattern of his periodic table. Mendeleev made a prediction that elements yet to be discovered would fill these gaps. When scientists discovered these missing elements they found many of Mendeleevs predictions were correct.

2. Changing the Arrangement of the Periodic Table

In 1914, Henry Moseley, a British scientist discovered how to determine the number of protons in an atom. Moseley's discovery of the atomic number (number of protons) resulted in a more accurate arrangement of elements in the Periodic Table. It became apparent that atomic mass was not the significant player in the periodic law as Mendeleev had proposed, but rather, the properties of the elements varied periodically with atomic number. When atoms were arranged according to increasing atomic number, the few problems with Mendeleev's periodic table disappeared. Because of Moseley's work, the modern periodic table is based on the atomic numbers of the elements.

There are over 110 elements in the modern periodic table arranged by increasing atomic number and similarities. These similarities are found in the rows and columns. The 18 vertical columns are called groups. The seven horizontal rows are called periods. In order to make the table more compact, two rows of elements are displayed below the main part of the table instead of in rows six and seven. When the elements are organized by period and group, elements in the same class are grouped together. Metallic elements range from the far right, across the middle and onto the left side. Metalloids form stair steps, starting at Group 13. The far right hand elements are nonmetals. Most of the radioactive elements are in the bottom rows.

Each square in the periodic table represents an element. The square may display information about the elements symbol, atomic number, atomic mass, state of matter, and class of element. The symbol is a short hand way to represent each element. The first letter of the symbol is always uppercase. If the symbol has a second letter, it is always lowercase. Some symbols are easy to remember, such as O for oxygen or C for carbon. While other symbols such as Fe for iron do not share any common letters. Some periodic tables display the symbols in different colors depending on their state of matter - solid, liquid, or gas at room temperature. The color of the square may also be used to show whether the element is a metal, nonmetal, or metalloid.

5. Periods of the Periodic Table

The rows of the periodic table are called periods. Periods are numbered one through seven on the left-hand side of the table. The elements in a period increase in atomic number from left to right. Elements in the same period also have the same number of orbitals. For example, all the elements in Period 2 have two orbitals while all the elements in Period 4 have four orbitals. At this time, the maximum number of electron orbitals or electron shells for any element is seven. The physical and chemical properties of elements in the same period are not all that similar but they follow a repeated pattern as you move across a period. For example properties such as conductivity and reactivity steadily change from left to right in each period.

6. Groups of the Periodic Table