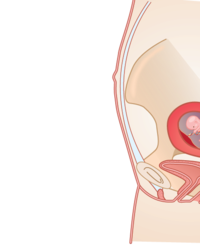 Table Of Contents: Reproduction--Continuing the Species

Both males and females produce sex cells. When sex cells combine during the process of fertilization, a new offspring is produced. Females release a single egg, or ovum, during a monthly reproductive cycle. Males produce millions of sperm cells. These cells are stored so they can be released as part of the fertilization process.

The moment of fertilization occurs within the female reproductive tract when a single sperm cell enters an egg. The nuclear material of the egg and sperm combine to form a zygote, which is the earliest stage of human embryonic development.

The male reproductive system is designed to continuously produce sperm through a type of cell division called meiosis that occurs within the male's testes. Each sperm is a specialized cell that develops a tail known as a flagellum. This tail gives the cell the ability to “swim,” an important function in the process of fertilization.

Sperm are produced in the male’s testes and carried through a series of tubules. The sperm are nourished and supported by secretions from accessory glands such as the prostate. Within the testes, specialized cells release the hormone testosterone, which is important in the process and rate of sperm production. Testosterone also controls the development of adult male physical characteristics, such as facial hair and a deep voice.

The organs of the female reproductive system are designed to support the growth and release of a single egg from the ovaries during a monthly cycle. The egg is released through uterine tubes, called the oviducts, into the uterus. The uterus is made up of an inner glandular wall and an outer muscular wall, both important in nurturing a developing fetus and helping move the fetus, through muscular contractions, during birth.

Female reproductive processes are controlled by different hormones. For example, the follicle-stimulating hormone is released by the pituitary gland to control the growth and release of the egg from the ovary. During this early stage of the cycle, the ovaries release estrogen and progesterone hormones to stimulate the growth of the inner lining of the uterus, in case fertilization occurs.

If an egg is released but not fertilized, then pregnancy does not occur. Hormone levels signal the breakdown of the inner lining of the uterus. This excess tissue and blood pass out of the body in a process known as menstruation. Then the monthly cycle starts all over again.

If an egg is fertilized within the female, the embryo will adhere to the inner lining of the uterus, establishing a connection through which the mother can nourish the fetus through pregnancy. The embryo is supported by the nutrient-rich blood vessels of the placenta. As the embryo grows into a fetus, the ovaries continue to produce hormones that keep the connection between fetus and mother very strong.

The zygote begins dividing and developing into a multicellular embryo as it travels down the oviduct toward the uterus. The embryo then attaches to the inner lining of the uterus and begins to grow rapidly. From this point, through the 8th or 9th week, there are many cell divisions and changes as the embryo shows signs of a developing nervous system and other organ systems.

From the ninth week of development until birth, the growing human is referred to as a fetus. After approximately nine months, a human infant is born. A number of dramatic changes occur in an infant’s lungs and circulatory system to allow the baby to breathe and circulate blood completely on his or her own. Previously, the baby was totally dependent on the mother through the umbilical cord connection with the placenta. At birth, this physical connection ends as the baby moves into another stage of the human life cycle.