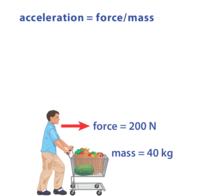 Sir Isaac Newton was an English mathematician, physicist and astronomer who lived in the late 1600s. He is considered to be one of the most influential scientists of all time. Newton proposed the law of universal gravitation as well as the three basic laws of motion, which have influenced the study of physics for over 300 years.

Newton’s first law is also known as the law of inertia. This law states that an object at rest tends to stay at rest and an object in motion tends to stay in motion with the same speed and in the same direction unless acted upon by an unbalanced force. Inertia is an object’s resistance to a change in motion. For example, when a car brakes, a passenger’s body will tend to move forward due to inertia. A seatbelt provides an opposing force to this inertia.

The equation that describes Newton’s second law is acceleration equals net force divided by mass. In this example, the cart has a force of 200 N and a mass of 40 kg. The acceleration is equal to 5 m/s2. Rearranging this equation to net force equals mass times acceleration is useful when you need to find the amount of force that is affecting an object.