Models of the Atom 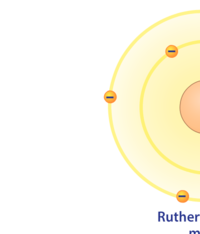 Table Of Contents: Models of the Atom

Scientists use models to explain things that cannot be seen directly. Since atoms are too small to be seen, scientists use models to describe their structure. The first model of the atom was proposed by the Greek philosopher, Democritus, who hypothesized that all matter was made of small particles, called atoms. He thought that different materials were made of atoms of different shapes and sizes. Over time, as new information has been discovered through experimentation, the model of the atom has changed to incorporate the new observations.

John Dalton was an educator who was very interested in science. In the early 1800s, Dalton conducted experiments on gases. From his results he formed a model known as atomic theory. Dalton hypothesized the following: 1) All matter is made of atoms and atoms are small particles that cannot be created, divided or destroyed. 2) All atoms of the same element are identical and different elements have different types of atoms. 3) Atoms combine with other atoms to form new substances. Much of Dalton's atomic theory is still accepted today.

3. Thomson's Model of the Atom

In 1897, J.J. Thomson performed experiments with currents of electricity inside empty glass tubes, which disproved Dalton's theory that atoms cannot be divided. He discovered that atoms have negatively charged subatomic particles, which he called "corpuscles." These particles are now called electrons.Thomson assumed that atoms were neutral, so if an atom had negatively charged particles, they must have an equal number of positively charged particles. In 1904, Thomson proposed a model of the atom as a solid sphere with equal numbers of positive and negative charges spread throughout, much as raisins might be embedded in the surface of a pudding.

5. Bohr's Model of the Atom

The Rutherford atomic model had a major drawback; it could not explain how the electrons stayed in a stable path around the nucleus. In Rutherford's model of the atom, the electrons are scattered around the nucleus. However, the positively charged nucleus would attract the negatively charged electrons. The force of attraction would pull the electrons towards the nucleus, making the atom collapse. In 1913, Niels Bohr made changes to Rutherford's model to explain the stability of atoms. Bohr proposed electrons move in stable, or stationary, orbits at fixed distances from the nucleus. Each orbit had an energy associated with it. The closest orbit had the lowest energy and the energy increased with the distance from the nucleus. If an electron moves between orbits, then energy in the form of light (or photons), is absorbed or emitted.

Many scientific advances have continued to change the model of the atom. In 1926, Erwin Schrˆdinger, an Austrian physicist, took the Bohr atomic model one step further. Schrˆdinger used mathematical equations to describe the likelihood of finding an electron in a certain position. This atomic model is known as the Quantum Mechanical model of the atom. Unlike the Bohr model, which defines the exact path of an electron, the Quantum Mechanical model predicts the probability of the electron's location. This model can be represented as a nucleus surrounded by an electron cloud. The probability of finding the electron is greatest where the cloud is most dense and least likely in a less dense area of the cloud. Until 1932, the atom was believed to be composed of a positively charged nucleus surrounded by negatively charged electrons. In 1932, James Chadwick discovered the neutron, an uncharged particle contained in the nucleus. Since then, through continued experimentation, more particles have been discovered in the atom. Quarks are believed to be even smaller units than protons and neutrons. In turn, quarks are made up of vibrating strings of energy. The search to find even smaller particles that make up an atom continues.