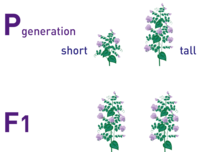 For his experiments, Mendel used true-breeding plants, called purebreds. The offspring of purebreds always had the same trait as the parent.

All the first generation (F1) offspring looked the same, displaying only one of the parental forms.

The first generation (F1) plants were crossed and the offspring displayed both forms of the characteristic.

Seventy-five percent (75%) of the F2 generation plants displayed the same form as the F1 parents, and 25% were the other form. These results were consistent when he repeated the crosses for each characteristic.

We now understand that these units of information are genes and they exist in pairs called alleles. The form of the characteristic is known as a trait.