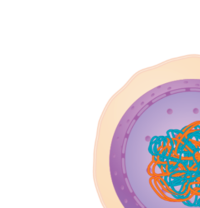 Table Of Contents: Meiosis I

Prophase I: Meiosis starts when the nuclear membrane breaks down, chromatin condenses and the replicated chromosomes become visible.

Homologous chromosomes move together to form pairs. This is referred to as synapsis. An exchange of DNA segments called crossing-over often occurs during synapsis.

Metaphase I: The homologous pairs then line up in the center of the cell.

Anaphase I: Chromosomes from each pair move to opposite sides of the cell.

6. Telophase I and Cell Division

Telophase I and Cell Division: A nuclear membrane starts to form around each set of chromosomes, and then the cell divides.

At the end of meiosis I, two daughter cells are formed, each with only half of the genetic material as the original cell.

8. Entire Process of Meiosis I Animation

Watch the entire process of meiosis I.