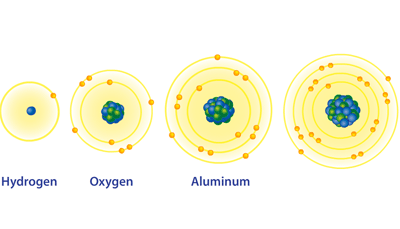 Table Of Contents: Introduction to Elements

An element is a pure substance that cannot be separated into simpler substances. This means an element is a substance made entirely of one type of atom. For example, every atom in a piece of copper is the same. Scientists have identified 90 elements that occur naturally in our universe. Some elements you might recognize include oxygen, iron, and calcium. There are also over 20 man-made elements, such as einsteinium. Man-made elements are radioactive and unstable and decay over time into lighter elements.

Most living and nonliving things are made up of a combination of elements. Elements chemically combine in a variety of ways to form compounds. A compound is made of two or more different elements bonded together in an exact ratio according to their masses. For example, water is a compound made of hydrogen and oxygen with a mass ratio of 1 to 8. However, if the mass ratio of hydrogen to oxygen is 1 to 16, the compound formed would be hydrogen peroxide. While water and hydrogen peroxide are both made of hydrogen and oxygen, they are different compounds with distinct properties.

Each element has a limited number of naturally occurring isotopes. Isotopes are different forms of the same atom. An isotope of an element has the same number of protons but different numbers of neutrons. Because atomic mass is determined by the number of protons and neutrons in an atom, isotopes of the same element have different masses. For example, while the most common isotope of oxygen has 8 neutrons, other isotopes of oxygen have 9 or 10 neutrons. While some isotopes are stable, others are radioactive and unstable. They decay to form other isotopes by releasing radiation in the form of particles or electromagnetic waves.

Scientists express the mass of an atom in atomic mass units (amu). The mass of a proton, the positively charged particle in the nucleus, is about 1 amu. The mass of a neutron, the particle in the nucleus with no charge, although a bit more massive than a proton is still considered to be 1amu. Each isotope of an element is identified by its mass number. The mass number is the sum of the number of protons and neutrons in an atom. The mass of an electron is so small that it is not used in calculating atomic mass. Because most elements contain a mixture of two or more isotopes, the atomic mass of an element is the weighted average of the masses of all the naturally occurring isotopes of that element.