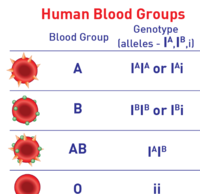 1. Function of a Gene

Each gene along a strand of DNA has the information to tell the cell to produce a specific protein.

A gene is made up of a particular sequence of DNA bases. This sequence acts as a code for a protein.

The production of different proteins determines the traits of an organism. A trait is an inherited characteristic.

Genes that exist in alternate forms are called alleles. The gene that determines earlobe shape exists in two alleles—one results in an attached earlobe and the other a free earlobe.

Some genes have more than two, or multiple alleles. The human ABO blood group gene has three alleles that can combine to four types of blood groups.