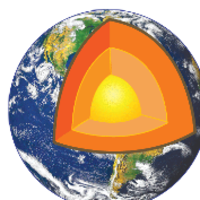 1. Seismograms and the Earth's Structure

2. Layers of the Earth

The Earth is composed of three main layers—the crust, mantle and core. These layers vary in composition, size, temperature and pressure.

The crust is the outermost layer of the Earth and is 5 to 70 kilometers thick. There are two different types of crust—oceanic and continental.

Oceanic crust is primarily composed of basalt that forms when magma pours out from the mantle onto the ocean floor. Oceanic crust is denser, but also thinner than continental crust.

Continental crust forms the landmasses called continents. This crust layer is composed of rocks such as granite. It is less dense, but thicker than oceanic crust.

The mantle is found below the crust and is approximately 3,000 kilometers thick. The mantle is made of solid, hot rock. The uppermost layer of the mantle and the crust make up what is known as the lithosphere.

The asthenosphere is found below the lithosphere and is called the upper mantle. It is made up of hotter, weaker rock. The lower mantle called the mesosphere is a thick layer of strong, solid rock.

The core is the densest layer of the Earth and is composed of nickel and iron. It is divided into a liquid outer core and a solid inner core.