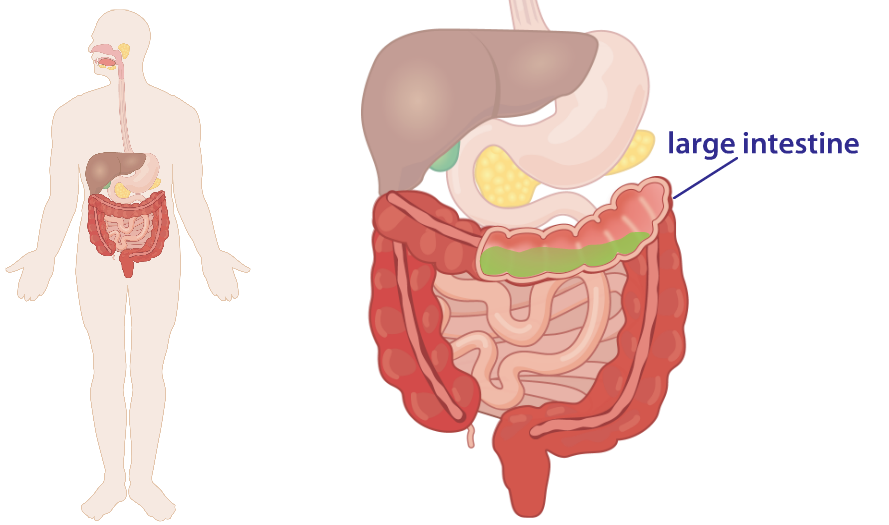 Your digestive system processes the food and drink you consume. Food is broken down physically and chemically as it travels through the digestive system. Nutrients are absorbed into your bloodstream, and remaining wastes are excreted from your body.

2. Organs of the Digestive System

The organs of the digestive system are connected, making a long pathway called the digestive tract. The digestive tract starts with the oral cavity of the mouth, which connects directly with the esophagus. The esophagus ends at the stomach, where food is deposited for processing. The food then moves through the small intestines that connect with the liver and pancreas which aid in the digestive process. Lastly, digested material enters the large intestine before being excreted from the body as fecal waste.

The mouth plays an important role in digestion. Food is mechanically broken down by the motion of your tongue and your teeth, which breaks the food into smaller particles and mixes it with saliva.

The esophagus is a muscular passageway that connects the mouth and throat to the stomach. Food is moved in one direction toward the stomach by the process of peristalsis – a series of muscle contractions.

In your stomach, food is stored and processed so that your body can gain access to the nutrients in the food. Food is mechanically broken down and churned physically with stomach juices, or gastric juices, to begin the chemical digestion of proteins. In this process, the stomach releases the enzyme pepsin into the very acidic environment of the stomach. Pepsin chemically breaks down the proteins into amino acids, which your body needs for many important functions.

The pancreas is a very important gland that is critical to human life. It produces a wide variety of enzymes that aid in the processing of foods. The enzymes are released into the small intestine to cause chemical breakdown of carbohydrates, fats and proteins.

The liver is a very large gland that performs many functions. In digestion, it produces and releases bile along a series of ducts connected directly to the small intestine. There is also a duct that connects with the gall bladder, where bile can be stored until it is needed. Bile is then released after a big meal into the small intestine to physically breakdown large fat droplets in foods as part of the digestive process.

The small intestine is about 20 feet long. Consumed materials that are partially processed move through the intestine. After being mixed with enzymes from the pancreas and bile from the liver, these materials are fully digested and the nutrients are absorbed into the walls of the small intestine.

The large intestine serves as a storage organ designed to help form the feces. It absorbs water and small amounts of nutrients, such as Vitamin K, into the bloodstream.