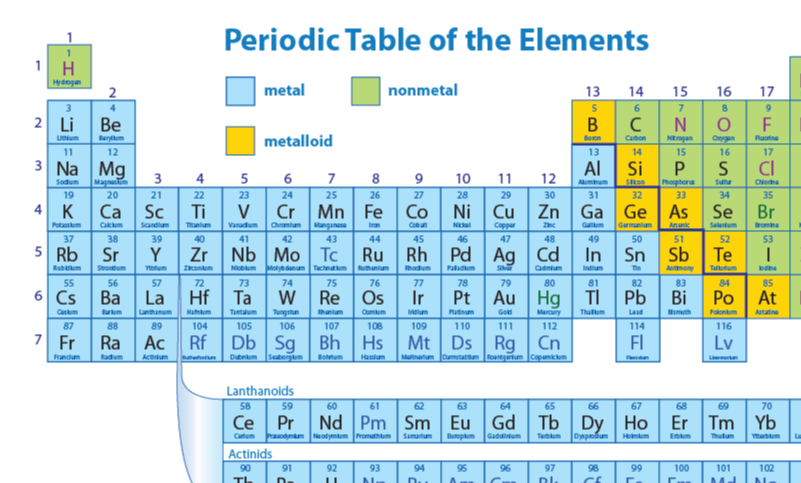 Table Of Contents: Classes of Elements

The largest class of elements in the periodic table is metals. Examples of metals include calcium, iron, gold, silver and mercury. Metals have some distinct properties. Due to their high melting points, most metals are solid at room temperature, with the exception of mercury which is a liquid. Most metals are malleable and ductile. Malleability is the ability of a metal to be hammered into shapes. Ductility is the ability of a metal to be stretched into wire. They are often shiny in appearance and are good conductors of heat and electricity. Atoms of most metals have 1-3 electrons in the outer shell and easily lose valence electrons. Metals combine with other metals, and select non-metals, to form a vast number of alloys that enhance the properties of metals in specific applications. For example combining iron, nickel and chromium produces a series of stainless steel alloys that are commonly used. Metals are often found combined with nonmetals as salts. Table salt is produced when the metal sodium combines with the nonmetal chlorine.

Nonmetals make up another class of elements. Some examples of nonmetals include oxygen, nitrogen, and fluorine. Due to their low melting points, most nonmetals are gases at room temperature. Some nonmetals are solids and one element, bromine, is a liquid at room temperature. Unlike metals, nonmetals have low densities, are brittle, and do not conduct heat and electricity. Nonmetals do not conduct electricity because their atoms are not likely to give up or lose valence electrons. Nonmetals usually have four to eight electrons in their outer orbital and most of them readily gain or share valence electrons. Although nonmetals can form compounds with metals, they can also form compounds with other nonmetals. For example, oxygen combines with sulfur to form sulfur dioxide. Carbon is a very important nonmetal because it is part of all compounds found in living things. Some nonmetals such as neon and helium are called inert or nonreactive because their valence shell is full and do not react with other elements to form compounds.

The smallest class of elements has properties of both metals and nonmetals. These elements are called metalloids. Examples of metalloids include silicon, germanium, and boron. All metalloids are solids and can be shiny or dull in appearance. Some metalloids are malleable but some are brittle. These elements have 3-7 electrons in their outer shell and can form bonds in similar ways as metals and nonmetals. Metalloids conduct heat and electricity, but not as well as metals. Semiconductors, made of such metalloids as silicon, can conduct electricity under certain conditions. Semiconductors are used to make electronic components like computer chips. Metalloids are also useful when combined with metals to form alloys. Pewter is an alloy that contains the metalloid antimony.