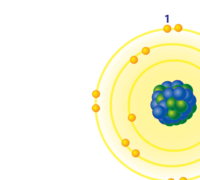 Atoms of most elements are more stable and are less likely to react with other atoms, when they have 8 valence electrons in their outer shell. For example, atoms of neon, argon, krypton, and xenon are very unreactive because they all have 8 valence electrons. Atoms usually react in a way that makes each atom more stable by losing, gaining, or sharing electrons in a chemical bond with other atoms.

In 1916, Gilbert Newton Lewis, an American scientist, proposed that chemical bonds are formed due to the electron interaction between atoms. His work established the basis of what we know today about chemical bonding. Atoms combine with other atoms through chemical bonds, which result from the strong attractive forces that exist between the atoms. Atoms bond together to become more stable by having a full valence shell. Certain elements are more reactive than others and will be more likely to bond with other elements. There are three main types of chemical bonding: covalent bonding, ionic bonding and metallic bonding. The bond between 2 nonmetals is usually a covalent bond. Whereas the bond between a metal and nonmetal atom is an ionic bond. Metal atoms bond by forming a metallic bond.