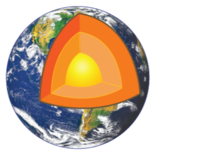 Magma is a mixture of liquid rock, gases and water formed from intense heat and pressure in the Earth's mantle.

A volcano forms when magma moves through the crust and erupts onto the surface of the Earth. Magma that flows onto the Earth's surface is called lava. Layers of cooled lava harden into rock and build up on the earth's surface around a volcano.

Most of the Earth's volcanoes are located at tectonic plate boundaries. These volcanoes are found on both continental and oceanic crust.

The belt of volcanoes along the boundary of the Pacific Ocean is called the Ring of Fire because it contains about 75% of the world's active volcanoes.

Some volcanoes form over hot spots that are not located along plate boundaries. A hot spot occurs when rising magma is close to the Earth's surface. The islands of Hawaii were formed over a hot spot in the Pacific Ocean.

Not all magma is the same. The composition and viscosity of magma can vary. These properties affect how fast the lava flows and the type of volcano that forms.

Although magma is a complex mixture, it is primarily composed of silica. Magma can contain from 50 to 70 % silica.

Beneath the surface of a volcano is a magma reservoir where rock that is exposed to heat and pressure changes into magma. A long tube through the crust called a pipe connects the reservoir to the surface.

Lava flows out onto the surface through an opening called a vent. Some volcanoes form smaller side vents where lava and gases escape. A cone-shaped depression called a crater often forms during explosive eruptions.

When magma rises toward the surface, gas bubbles expand and increase in pressure. The force of the gas pushes the magma out of the vent and causes an eruption.

There are two types of eruptions—quiet and explosive. Quiet eruptions are non-explosive and occur in volcanoes with low-viscosity, low-silica magma. The fast-moving lava flows out of the vent and across the surface of the land.

Explosive eruptions occur in volcanoes with thick, high-viscosity magma that is high in silica. Magma builds up within the volcano's pipe rather than flowing out. Pressure increases until an explosive eruption occurs.

Volcanic material can be found in all different sizes from tiny ash particles, to cinders, to large pieces called volcanic bombs. Obsidian, pumice, basalt, and rhyolite are all igneous rocks that form from volcanic eruptions.

Volcanoes are classified by their shape. There are three types of volcanoes—composite, shield and cinder cone.

A cinder cone is a small, steep volcano that is created from the accumulation of ash and pyroclastic material. They often have a crater where the top of the volcano was blown off during an explosive eruption.

7. Life Cycle of a Volcano

Volcanoes have different stages of activity. An active volcano is one that is erupting or showing signs of erupting soon. A dormant volcano has not erupted for a while, but is expected to erupt in the future. An extinct volcano will probably never erupt again.

Volcanoes can cause widespread damage. Huge clouds of ash may bury towns, and volcanic gases can be deadly. A lava flow covers everything in its path and can start fires and landslides.

9.2. Structure of a Volcano

After an eruption, the magma reservoir of a volcano may be partially emptied. Some volcanoes collapse into this chamber, forming a large depression on the surface called a caldera.

Volcanic necks are the remnants of a volcanic plug within a previously active volcano. The hardened magma is exposed by weathering and erosion. A dome mountain is magma that hardens below the crust and is uplifted.

Magma that exists very close to the Earth's surface can warm the groundwater. Hot springs and geysers are formed when this water emerges on the surface of the Earth.

After an eruption, the magma reservoir of a volcano may be partially emptied. Some volcanoes collapse into this chamber, forming a large depression on the surface called a caldera.