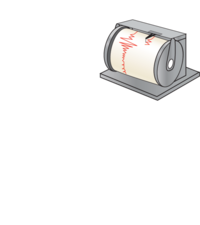 2.1. Seismograms and the Earth's Structure

The Earth is composed of three main layers—the crust, mantle and core. These layers vary in composition, size, temperature and pressure.

The crust is the outermost layer of the Earth and is 5 to 70 kilometers thick. There are two different types of crust—oceanic and continental.

Oceanic crust is primarily composed of basalt that forms when magma pours out from the mantle onto the ocean floor. Oceanic crust is denser, but also thinner than continental crust.

Continental crust forms the landmasses called continents. This crust layer is composed of rocks such as granite. It is less dense, but thicker than oceanic crust.

The mantle is found below the crust and is approximately 3,000 kilometers thick. The mantle is made of solid, hot rock. The uppermost layer of the mantle and the crust make up what is known as the lithosphere.

The asthenosphere is found below the lithosphere and is called the upper mantle. It is made up of hotter, weaker rock. The lower mantle called the mesosphere is a thick layer of strong, solid rock.

The core is the densest layer of the Earth and is composed of nickel and iron. It is divided into a liquid outer core and a solid inner core.

Convection is caused when a fluid has differences in temperature and density. When a liquid becomes cooler, its particles move more slowly and the liquid becomes denser.

As the mantle rises, it also cools. When it cools, it becomes denser and then descends back towards the center of the Earth.

There are also convection currents in the outer core. These currents contribute to the Earth's magnetic field.

5.1. What Is the Continental Drift Theory?

In the early 1900s a scientist named Alfred Wegener proposed the continental drift theory, which suggests that the continents were once together as a single landmass that broke up and drifted apart over millions of years.

5.2. Basis of the Continental Drift Theory

Wegener based his theory on the observation that the boundaries of the continents appear to look like pieces of a large puzzle.

According to the continental drift theory, all of the continents once formed a large, single landmass called Pangaea. We now know that Pangaea existed 245 million years ago, when dinosaurs were roaming the Earth.

About 180 million years ago, Pangaea began to split into two smaller continents called Laurasia and Gondwana.

Approximately 65 million years ago, these two landmasses had broken apart to form the modern continents.

The continental drift theory was an accepted part of geology for about 50 years until it was replaced by the more complete theory of plate tectonics.

In the middle of the Atlantic ocean is a submerged mountain range called a mid-ocean ridge. It is part of a worldwide system of mid-ocean ridges formed by sea-floor spreading.

Sea-floor spreading occurs when two tectonic plates pull away from each other, and a crack forms in the ocean floor. Magma from the Earth's mantle pours onto the ocean floor through the crack and creates new oceanic crust.

A mid-ocean ridge is formed along the crack where magma is emerging. As the sea floor spreads, new oceanic crust pushes the older crust away from the ridge.

Sea-floor spreading is part of the plate tectonics theory. In the Atlantic, the plates move away from the mid-ocean ridge at a rate of about one centimeter per year. As the sea floor spreads, the Earth's crust is changing and moving the continents as well.

7.1. What Is the Theory of Plate Tectonics?

The theory of plate tectonics was proposed in the 1960s. It states that the lithosphere is broken into pieces called tectonic plates that are moving on top of the upper mantle. The plates carry both the continents and the ocean floors.

According to the theory, the tectonic plates are in motion due to the movement of convection currents in the mantle.

The tectonic plates move against each other at their boundaries, resulting in intense geologic activity, such as volcanoes, earthquakes and mountain formation. There are three types of plate boundaries—divergent, convergent and transform.

New crust is created at divergent boundaries, where two plates are moving apart. This type of boundary creates mid-ocean ridges in the oceanic crust and rift valleys on land.

A subduction zone occurs when a dense oceanic plate is pushed down into the mantle below another plate. Over time, the subducted crust melts in the mantle. This geologic activity creates volcanic islands in the oceans and volcanic arcs on land.

Subduction does not occur at the convergent boundary of two continental plates. Instead, the crust is pushed upward and mountain ranges are formed.

A transform boundary occurs when plates slide past each other, such as the San Andreas fault in California. These boundaries are called conservative because plate material is neither created nor destroyed.

Roll over each box to see continental movement over geologic time. Drag and drop the boxes into the correct sequence, from the oldest continental arrangement to the modern continents.

In this virtual investigation, you will explore the geologic activities and formations that occur at the boundaries of moving tectonic plates. Real-world examples of the different types of plate boundaries are also provided.