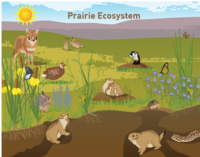 An ecosystem is a group of organisms and their physical environment. All organisms within an ecosystem need energy to survive.

Organisms obtain energy from different sources. Each organism plays a role in the flow of energy through the ecosystem.

Producers make their own food through the process of photosynthesis. Plants, algae and some bacteria are producers that use the sun's energy to make food.

Consumers get energy by eating other organisms. They are often classified by what they eat. Herbivores only eat plants. Carnivores eat animals, and omnivores eat both plants and animals.

Energy flows from producers to the different types of consumers. For example, plants are eaten by herbivores such as grasshoppers. A grasshopper is eaten by a mouse, which is then eaten by a rattlesnake.

Decomposers obtain energy by eating or absorbing nutrients found in animal waste and dead bodies. Bacteria, fungi and worms are decomposers that help return raw materials to an ecosystem.

Movement of energy can be shown in a food chain. A food chain is a series of events in which one organism eats another organism to obtain energy.

Food chains are linear and look at one path of energy flow. This is a food chain for a snake.

The levels of a food chain are referred to as trophic levels. Each level indicates one more energy-transferring step away from the sun.

A food chain is made of producers and multiple levels of consumers. Top-level consumers are typically carnivores that do not have any natural enemies.

Energy flows through an entire ecosystem in a complex network of feeding relationships called food webs. Many different food chains are found within a food web.

Producers are at the base of the food web. First-level consumers are primarily herbivores.

Decomposers such as worms, fungi and bacteria are also included in a food web.

An owl generally swallows its prey whole. Some parts of the prey, such as bones, are indigestible and form an oval-shaped mass called a pellet in the owl’s gizzard.

The pellet is regurgitated through the owl’s mouth. A pellet may contain the remains of more than one prey if the owl has eaten multiple meals within several hours.

Scientists can learn about an owl’s diet by examining its pellets. Bones, fur and feathers provide evidence of what the bird has eaten.

6.5. Identifying Bones in an Owl Pellet

The bones can be specifically identified as part of the skeletal system of a particular animal.

Because organisms use food energy for movement, growth and daily activities, there is only a portion of energy available for the next organism in the food web.

An energy pyramid is a way to show the different levels of stored energy within an ecosystem. As you move up the pyramid, less energy is available.

Approximately 10% of the energy from one level is transferred to the next higher level. In this example, the top-level consumer receives only a small amount of energy that originated in the producer level.

8.4. Ecosystems and Number of Organisms

An ecosystem can only support a limited number of trophic feeding levels. There are many more organisms at the producer and first-level consumer levels than at the higher levels of the energy pyramid.

This food web shows the feeding relationships of organisms in an Alaskan marine ecosystem. If the population of seals and sea lions dramatically decreased, what impact would it have on this food web?

9.3. Killer Whales Feed on the Otters

Without as many seals and sea lions to eat, killer whales might start feeding on more sea otters, causing a decline in their population.

With fewer otters as predators, the number of sea urchins would grow and eat more of the kelp forests.

The kelp forests are the habitat for many fish larvae. Loss of this habitat would cause a decline in the fish population.

This example demonstrates that the original change in the population of the seals and sea lions could cause a chain reaction of events that would alter the balance of the food web.

Owls are typically top-level consumers in their food web. They eat a variety of organisms including rodents, birds, reptiles and amphibians. Owls usually swallow their prey whole. The indigestible parts of the prey (fur, bones, feathers, claws, teeth) form a pellet in the owl's gizzard. The pellet is then regurgitated, containing the remains of what was eaten. In this virtual investigation you will dissect barn owl pellets. You will sort the bones found in the pellets and identify which type of prey the owl has eaten.