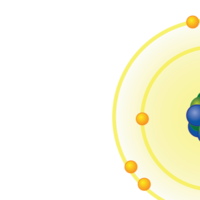 Table Of Contents: Electricity and Magnetism

The interaction of electric charges is called electricity. If particles have opposite electric charges, they attract each other. If particles have similar charges, they repel each other. These interactions explain why an atom is held together. The positively charged protons in the nucleus exert a strong attraction for the negatively charged electrons that surround the nucleus.

2.5. The Movement of Electric Charges

An electroscope is an instrument used to detect charged particles. It has a long metal rod with a knob on top and two metal leaves attached to the bottom. The leaves hang straight down if the electroscope has no charge. If a charged object touches the knob and electrons are transferred, the metal leaves become charged. Because the leaves are the same charge, they repel each other and spread apart. The leaves will move in the presence of a negative or positive charge. An electroscope can tell us if an object is charged, but it cannot tell us if the charge is negative or positive.

Use the whiteboard text tools to complete the activity.

4.1. What is Electric Current?

4.2. Current Is Measured in Amps

The rate of flow of electrical charges, or current, is expressed in amperes, also called amps. The capital letter A is used to symbolize this unit. In equations, amps are symbolized by the capital letter I. Marie Ampere was a French physicist who lived in the early 1800s and is known for his extensive research in electromagnetism.

There are two types of electric current, DC and AC. The charges in DC, or direct current, always flow in the same direction. The charges in AC, or alternating current, flow one way and then flow the other way. They are continuously reversing direction. Many batteries produce DC electricity. You can find DC batteries in cell phones, cameras, and even cars. Electric appliances around the house such as microwaves, televisions and washing machines use AC electricity.

Two famous scientists, Thomas Edison and Nikola Tesla, were both interested in developing electrical supply and power systems. Edison was a strong proponent of direct current (DC) systems while Tesla supported alternating current (AC) systems. Today, in our homes, the electrical power is supplied using alternating current because it is easier to safely control the voltage of this type of current.

An electric circuit is a complete path that electricity flows through. For electrical current to continuously flow, the charges must move through a path that is unbroken. This continuous flow of current within a circuit enables us to use electrical power. Our homes and machines use a variety of electric circuits.

Electric currents will flow in a wire, as long as there is voltage. Voltage is the potential difference between two points in a circuit. Another way to think about it is the amount of energy released as a charge moves between these two points. Voltage is measured in units called volts. In equations voltage is symbolized by the letter V. The greater the voltage is, the higher the current. For example, a 1.5-volt battery used in a camera produces less electrical current than a 12-volt battery used in a car.

Some materials will increase in resistance as the temperature increases. The copper atoms within a wire move faster as they gain thermal energy. This increased molecular movement creates resistance by slowing down the flow of electric charges through the wire.

A wires length and thickness affect resistance. Longer wires produce more resistance than shorter wires. As the electrical charges move through the length of the wire, they slow down as they collide with the walls of the wire. Thinner wires are more resistant than thicker wires. Thin wires have less area for the charges to flow through, and therefore the current is slower than thick wires.

Georg Ohm, a Bavarian mathematician and physicist, defined the relationship between resistance, voltage and current. The formula for this relationship, known as Ohms Law, is resistance is equal to voltage divided by the current. For example, if the voltage of a toaster is 120 volts and the current is 12 amps, then the resistance of the toaster is 10 ohms.

Machines and appliances transform electrical energy into other types of energy. A stove transforms electricity to heat, and a stereo transforms electricity to sound. The rate at which electrical energy is transformed into another type of energy is called electric power. The unit for electrical power is a watt, and the formula is power equals voltage times current. For example, an electric stove top that uses 240 volts and has a current of 50 amps has 12,000 watts of power.

This table is a summary of electric measurements, and their corresponding units, unit symbols and abbreviations in formulas. Lets look at the example of electrical power. If you are referring to the power of a light bulb, then you would use the unit called a watt. You would write 60 watts using a capital W. If you wanted to write out the formula for power, you would use the abbreviation capital P for power.

Use the whiteboard text tools to solve the problems.

Use the whiteboard text tools to solve the problems.

Use the whiteboard text tools to complete the table.

6.1. Parts of an Electric Circuit

An electric circuit is a complete path that current flows through. All electrical circuits contain an energy source, wire and a load. The energy source causes charges to move on the path. A battery, power plant and generator are sources of energy. The wires connect the parts of a circuit. The load is a machine or device that is connected to the circuit by wires. The load transforms electrical energy to other types of energy, such as light or heat. Often a switch is included to control the current in a circuit. A closed switch allows the current to flow, while an open switch turns the current off because it causes the path to be broken.

You can use a diagram to show the path of an electric circuit. Symbols represent each part of the circuit: the energy source, the wire, the load or resistor, and the switch. Arrows indicate the direction of the current.

There are different types of circuits. The current in a series circuit can only flow in one path, and it must flow through all the circuit components. In this series circuit, the current flows through each of the bulbs in a sequence. Because all the loads in the circuit share the same current, the bulbs are the same brightness. Adding more bulbs increases the resistance. This causes a decrease in the current, which results in a decrease in the brightness of all the bulbs. If any of the bulbs fail in a series circuit, the current will stop flowing, and the other bulbs will stop working.

8.1. Volta and the First Battery

Alessandro Volta, an Italian scientist who lived in the 1800s, developed the first battery. Volta hypothesized that a chemical reaction occurs between two metals and a salty fluid to create an electrical current. He soaked paper in salt water and placed it between zinc and silver. Then, when he connected wires to the pieces of metal, a current was produced. Volta had created the first battery, which was the foundation for modern electrochemical cells and batteries.

Safety should always be kept in mind while working with electricity. Use dry hands while using electrical appliances because water conducts electricity. Keep water away from plugs and electric cords. Standing water near electric tools can be very dangerous. Make sure your home is equipped with fuses and circuit breakers that break the electrical current if too much current starts to flow.

Lightning is a powerful, yet dangerous, form of electricity. If you are caught outside in a lightning storm, stay away from power lines as well as tall trees and structures. Power lines carry high voltage electricity. If these lines are damaged or fall down during a storm, they can potentially cause serious injury. Never touch a downed electric wire.

A magnet is a substance that attracts the element iron or materials that contain iron. All magnets have opposite ends called the north pole and the south pole. Similar magnetic poles repel each other, and opposite poles attract each other.

Inside a magnet there are clusters of atoms known as magnetic domains that are responsible for magnetic properties. If the atoms with similar magnetic fields within a domain line up in the same direction, they are said to be magnetized. Atoms that are arranged in random directions within a domain are considered to be non-magnetic. Natural elements that can be magnetic include iron, nickel, cobalt, gadolinium, samarium and neodymium.

Deep in the Earth, the convection currents in the liquid iron core create a magnetic field that impacts the Earths magnetism. The Earth acts like a giant magnet, having two opposite poles and a strong magnetic field. The Earth's geographic poles are at a slightly different location than the Earths magnetic north and south poles. The positions of the magnetic poles are dynamic and they shift from year to year. This map shows the changing position of the north magnetic pole in recent history.

Safety should always be kept in mind while working with electricity. Use dry hands while using electrical appliances because water conducts electricity. Keep water away from plugs and electric cords. Standing water near electric tools can be very dangerous. Make sure your home is equipped with fuses and circuit breakers that break the electrical current if too much current starts to flow.

In this investigation, you will build a variety of working circuits. You must include a switch in each circuit you build. The circuit components are provided, but you must place them in the correct configuration for the circuit to safely work. Once the circuit is working, you can measure the voltage and current at different points on the circuit. You can also explore what happens when a load (light bulb) in the circuit breaks. Click on each tab at the top for a different circuit building challenge.