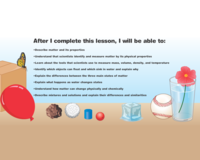 Table Of Contents: All About Matter

Everything that you see, smell or touch around you is matter. Even many things that you cannot see, smell, or touch are matter. Living and nonliving things are made of matter, including our clothing, the food we eat, and even the air that we breathe.

Matter is anything that takes up space and has mass. The amount of matter in an object is its mass. Air is matter that you can't see, yet it still takes up space. You can observe this as you blow up a balloon; the air takes up space making the balloon bigger.

Matter can have several different properties. A property is a feature, trait or characteristic and is used to describe an object. For example, two properties that describe a marshmallow are that it's soft and white. While we can use our senses to identify many physical properties of matter, some properties are measurable.

5.5. Properties of Matter - Use your Senses

Physical properties that can be identified with your senses include color, odor, shape, hardness, and texture. For example, you can smell the odor of a rose, observe its color and shape, and feel its texture.

5.6. Properties that Can be Measured

Physical properties that can be measured include mass, volume, density, temperature, and attraction to magnets. Each is measured with a different tool. Scientists use the metric system when measuring matter.

5.9. Measuring Volume of a Liquid

Volume is the amount of space an object takes up. There are several tools that can be used to measure volume, such as measuring cups, graduated cylinders, and beakers. The units of measure are milliliters or liters. For example, to measure 50 mL of water, we pour it into a cylinder, until it reaches the 50 mL point marked on the side.

5.10. Finding the Volume of a Solid Object

A graduated cylinder can also be used to measure the volume of solid objects, such as a rock. Fill a cylinder to about the half-way mark with water and read the number on the side. Place the rock in the cylinder and read the water level again. Now, subtract the old reading from the new reading and you have just measured the volume of the rock.

Did you ever wonder why some small objects weigh more than larger objects? It depends on their density. Density is a measure of how much matter fits into a certain amount of space. To find out the density of an object divide its mass by its volume. Which do you think has a greater density- a bowling ball or a basketball? If you guessed the bowling ball, you're correct!

Attraction to magnets is also a physical property of matter. Certain objects that contain the metal iron are attracted to magnets. Such objects are magnetic. They include keys, metal paper clips, and iron nails. Magnets do not attract non-magnetic objects made of plastic, wood, or paper.

The three states of matter are solid, liquid,and gas. Matter can change from one state to another through a change in temperature.

Condensation is the opposite of evaporation. It takes place when water vapor (gas) cools and changes from vapor to liquid. If you've ever left a cold drink outside on a hot summer day, then you've already seen condensation. As the water vapor in the warm air touches the cold surface of the glass, it cools forming water droplets (liquid) on the glass.

A physical change to matter happens when matter changes size, shape, or form, but does not change the type of matter it is. For example, let's say you cut a piece of paper into smaller pieces. The original piece of paper has undergone a physical change; it has changed both shape and size, yet, it is still paper.

Chemical changes to matter happen when one type of matter changes into another type of matter. For example, the matter that you start with in a campfire is wood. As the wood burns, it undergoes a chemical change - turning into gases and ashes.

A solution is a type of mixture in which matter is evenly mixed or combined. Lemonade is an example of a solution. It is a mixture of water, lemon juice, and sugar combined evenly into a drink. Once the parts of lemonade are combined together, they cannot be separated. This is one main difference between a mixture and a solution.