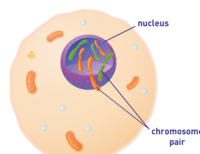 Chromosomes are made up of DNA (deoxyribonucleic acid), the hereditary material in humans and most other organisms.

The hereditary information in DNA is stored as a code of four nitrogen bases: adenine, guanine, cytosine, and thymine.

Specific sections of the DNA are called genes. Each gene provides the cell with different information.

Each chromosome is made up of many genes. There are about 100,000 genes found on human chromosomes.

In each human body cell, there are 46 chromosomes, existing in 23 pairs.

Each gene along a strand of DNA has the information to tell the cell to produce a specific protein.

A gene is made up of a particular sequence of DNA bases. This sequence acts as a code for a protein.

The production of different proteins determines the traits of an organism. A trait is an inherited characteristic.

Genes that exist in alternate forms are called alleles. The gene that determines earlobe shape exists in two alleles—one results in an attached earlobe and the other a free earlobe.

Some genes have more than two, or multiple alleles. The human ABO blood group gene has three alleles that can combine to four types of blood groups.

Double-stranded DNA (deoxyribonucleic acid) has a twisted ladder-like shape called a double helix. Each DNA strand is composed of a series of nucleotides.

The nitrogen bases pair with each other, adenine with thymine and cytosine with guanine. These are called complementary base pairs.

4.4. Role of DNA in Replication

The sequence of these DNA nitrogen bases provides a code. The code serves as a template when DNA is copied in a process called replication.

4.5. Role of DNA in Transcription

In a similar process called transcription, the DNA code is used to make RNA (ribonucleic acid).

5. Overview: From DNA to Protein

To make a protein, a gene's DNA sequence is transcribed to a strand of RNA. Then the RNA is translated into a chain of amino acids by a ribosome, and a protein is formed.

During the process of transcription a DNA gene sequence is copied to a single RNA (ribonucleic acid) strand called a messenger RNA, or mRNA.

Transcription starts when double-stranded DNA unwinds and exposes a sequence of nitrogen bases.

A new strand of complementary bases forms to create RNA.

The structure of RNA is similar to DNA, but it uses the nitrogen base uracil instead of thymine.

8.5. RNA Travels to the Cytoplasm

The messenger RNA carries the code to the ribosomes in the cytoplasm.

The process of converting the coded information on the messenger RNA to a protein is called translation.

9.2. Messenger RNA Attaches to a Ribosome

The mRNA travels through a nuclear pore to the cytoplasm and attaches to a ribosome. The ribosome moves along the mRNA strand, translating the code.

Three sequential mRNA bases form a triplet code for a particular amino acid. Each triplet is called a codon.

Every tRNA has an anticodon region that is complementary to a specific codon on the mRNA.

Each time a tRNA anticodon and codon pair, an amino acid is added to a chain that eventually forms a specific protein.

Many tRNA molecules and ribosomes work together at the same time along one strand mRNA.

The correspondence between the RNA triplets or codons and specific amino acids that are used to form a particular protein is called the genetic code.

For example, the triplet code UUC on a messenger RNA always pairs with the transfer RNA that carries the amino acid phenylalanine.

This is the Genetic Code table. Find the codon UUC by starting with the left column, then going across the top, and then down the right column. UUC corresponds to the amino acid phenylalanine.

10.4. Universal Nature of the Genetic Code

The genetic code is the same in nearly all organisms.

A mutation is a change that occurs in a gene or chromosome that can cause incorrect or different proteins to be made and alter an organism's normal trait.

A mutation in the DNA can occur when a single base pair is changed, removed, or added. Mutations can also happen when large sections of DNA are altered.

Other mutations happen when the chromosomes don't separate properly during meiosis. Sex cells can end up with more or less than the normal number of chromosomes.

Mutations are harmful if they decrease an organism's ability to survive or reproduce. Other mutations can be helpful. Mutations are often inherited and introduce changes in a species.

Before mitosis begins, a cell doubles its amount of chromosomes by replicating, or copying all of its DNA. During replication, double-stranded DNA unwinds and each strand acts as a template for a new strand. DNA transcription is a similar process except only a part of the DNA sequence is copied to form a messenger RNA (mRNA) strand. In this investigation you will build new strands of DNA and RNA using nitrogen bases, sugars and phospates to create the nucleotide sequence. Remember, during replication when you are copying DNA, you must build two new strands of DNA, but during transcription only a single strand of RNA is built. Choose Build DNA or Build RNA to begin the investigation.